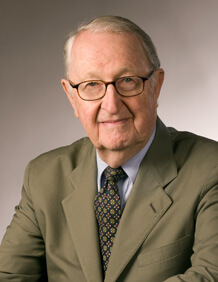 A Tribute to Henry Leader

It was 1952 and a middle-aged Judge by the name of McClean Stock was searching for someone to help him expand his nearly 50 year old law practice.  What he found was an eager young attorney and Yale Law School graduate by the name of Henry Leader who had just returned from military service in World War II.  At the time, neither one had any idea that their partnership would change York County’s legal landscape forever.

Years after the formation of Stock and Leader came the passing of Judge Stock, and it was then up to Henry Leader to carry on the firm’s legacy. A soft-spoken man with an ambitious spirit, he continued to build upon the firm’s sturdy foundation, adding more attorneys and practice areas to the quaint Duke Street office. More than 60 years later, in the wake of his passing, we pay tribute to the man who started it all.

There was much more to Henry Leader than legal briefs and long nights at the office. He was a visionary, a community activist, a progressive thinker and humanitarian. He had his hand in many ventures, from helping to revitalize York City through his involvement with the Redevelopment Authority, to his work in reviving the arts through the implementation of a $1 million dollar capital campaign for the York Little Theater. He even gave politics a try, running unsuccessfully for York City mayor and state Senate. However, he did serve as Legislative Liaison for his brother Governor George Leader’s administration and there was a general consensus that he was critical to George’s time in office. He was also a firm believer that education was the key to building a better tomorrow for the City’s youth, and on that principle he worked to improve the educational climate for the students of York City School District through his work with the York City Dollars for Scholars (YCDFS). In 2007, the York County Community Foundation honored him for his commitment to education by establishing the Henry and Dorrie Leader Education Endowment Fund.

While his laundry list of accomplishments and accolades is no doubt impressive, there is one thing you may not find on Henry Leader’s formal resume, something that only those closest to him could fully understand. He was a true family man, kind-hearted and as genuine as they come.

After meeting at Swarthmore College, Henry married his wife Dorie in the early summer of 1946. They were kindred spirits, fueled by a love of life and a desire to take advantage of every opportunity it had in store. They spent the next 66 years devoted to each other and their four daughters, growing and learning together each day until Dorrie’s passing in 2012.

However, for Henry, the definition of family could not be restricted to those who shared the same blood line, and throughout his lifetime he continued to add members to his already impressive family tree.  Even as the Managing Partner of Stock and Leader, he regarded the attorneys and staff he employed as a family all his own.  He would often invite his colleagues to spend time at his home on Rehoboth Beach, where many recall memories of indulging in his patented railroad sandwiches and spiked watermelon.

Each year, when the summer came to a close and the scent of fall graced the air, he would once again gather a group of his colleagues and head north to enjoy one of his life-long passions, Penn State football. A creature of habit, those who accompanied him reported his game day ritual to include martinis, peanut butter ice cream from State College staple, The Creamery, and dinner at Catalono’s.

It’s 2015 and the quaint Duke Street office that originally housed the firm has been traded for a city view office atop the Susquehanna Commerce Center. The County’s legal landscape is different now and a new generation of visionaries, community activists, humanitarians, and progressive thinkers are working to make their mark on the community. But even with the changing times, one thing remains constant: Henry Leader’s legacy will forever live on.