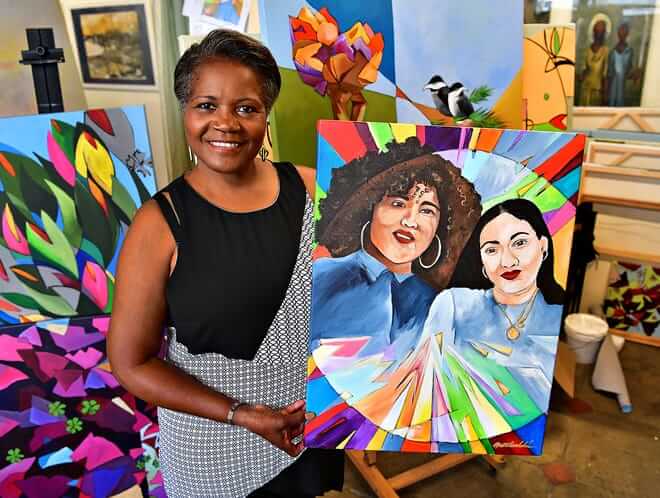 Congratulations, Ophelia Chambliss! Ophelia is the recipient of this year’s YWCA York Dorrie Leader Advocacy Award sponsored by Stock and Leader. This award is named after the late Dorrie Leader, an influential community civil rights advocate and former YWCA York board president. Dorrie was the spouse of Stock and Leader’s co-founder, Henry B. Leader.

Quoting Chambliss, “I use my art as a tool to advocate for my community, whether it be people of color, the youth, or women. I believe it to be part of my personal mission to create things that form a sustainable, and accurate historical record, as well as prompting people to think about where we want to lead in the future.”

An excerpt is taken from an article published in the York Dispatch on August 21, 2021:

Leader went on to serve on the national board of the YWCA from 1958 to 1976. She had also brought her two daughters to the 1963 March on Washington, where Dr. Martin Luther King Jr. gave his iconic “I Have a Dream” speech.

Chambliss knew Leader, she said. In fact, Leader’s activism, benevolence and focus on her community became an inspiration for Chambliss.

“For all of us, we know that Mrs. Leader would be thrilled with Ophelia as the recipient — for so many reasons,” Treuthart said. “And the fact they actually knew each other really deepens that.”